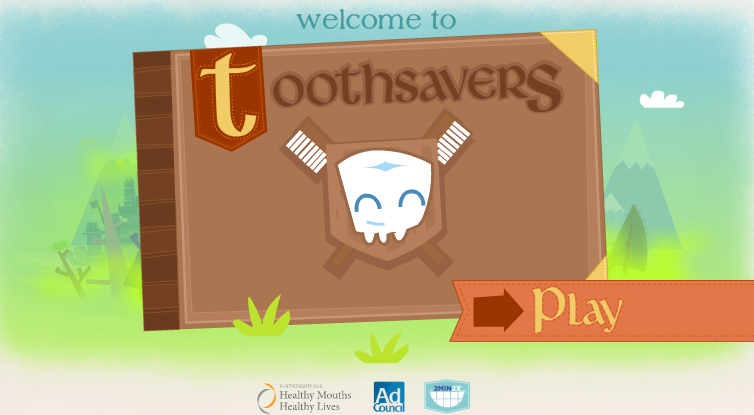 NEW YORK, Jan. 15, 2014 /PRNewswire/ — The Ad Council and the Partnership for Healthy Mouths, Healthy Lives announced today the release of the new mobile gaming app, Toothsavers, available online and for Android and iOS devices. Created on behalf of theKids’ Healthy Mouths campaign, the free mobile game is the first developed in-house by the Ad Council — the nation’s largest producer of public service advertising. The app inspires kids to brush their teeth for two minutes, twice a day by enlisting them in rescuing friendly fairy tale characters from an evil, cavity-creating sorceress who cast a wicked teeth-rotting spell on the kingdom.

Featuring a fun and colorful design, Toothsavers includes three key features to help parents and their kids learn about the importance of oral health:

“Toothsavers is a terrific way to get kids thinking about their teeth from an early age,” saidGary Price, Secretary and CEO of the Dental Trade Alliance Foundation. “I look forward to seeing families embrace the app as both a teaching tool and a way to monitor their daily toothbrushing routines.”

“Mobile technology plays a major role in influencing young people’s behavior and is a great fit for this campaign,” said Peggy Conlon, president and CEO of the Ad Council. “We’re thrilled to release our first mobile game, which represents our ongoing efforts to use technology to promote health, education and well-being. We look forward to using this app to help kids maintain healthy oral health habits, and have fun while doing it!”

Currently, 91 percent of American adults own a cellphone[i]. According to Ad Age, “U.S. adults spend an average of two hours and 21 minutes per day using their mobile devices for activities other than phone calls.”[ii] Common Sense Media reports that one in five kids under the age of 8 uses a mobile device every day.[iii]

Launched August 2012, the Kids’ Healthy Mouths campaign has received more than $46 million in free ad time and space and nearly 1.6 million visitors to the campaign website,2min2x.org, which offers a collection of free, two-minute videos — featuring notable characters from children’s shows and networks. In addition, after its first year, the Kids’ Healthy Mouths campaign has reported progress in the effort to improve children’s oral health habits. A survey released in August 2013 indicated that more children in the United States now regularly brush their teeth.

Toothsavers is now available for free in the App Store and Google Play (both smartphones and tablet version). It is also on the web at 2min2x.org/PlayToothsavers. The game is geared toward children ages 3 to 6. For more information, visit 2min2x.org/toothsavers.

The Partnership for Healthy Mouths, Healthy Lives (healthymouthshealthylives.org) is a coalition of the leading organizations in the field of oral health. The Partnership is committed to improving children’s oral health so that they can develop into healthy, productive adults. The coalition shares the view that no child should be in pain and suffer broader health issues or endure the social stigma and lack of opportunity resulting from untreated dental diseases and conditions. The coalition’s primary mission is to teach parents and caregivers, as well as the children themselves, to take control of their own health through oral disease prevention.

The Ad Council is a private, nonprofit organization with a rich history of marshaling volunteer talent from the advertising and media industries to deliver critical messages to the American public. Having produced literally thousands of PSA campaigns addressing the most pressing social issues of the day, the Ad Council has affected, and continues to affect, tremendous positive change by raising awareness, inspiring action and saving lives. To learn more about the Ad Council and its campaigns, visit www.adcouncil.org, like us on Facebook, follow us on Twitter or view our PSAs on YouTube.

Confidence Is Beautiful – This Really is so True!
January 6, 2014